Please Wait Whilst We Try to Connect You

Wilton’s Music Hall is fast becoming a significant dance venue, with its Strike! festival presenting a compelling mix of new work. Last Friday’s programme offered Elise Nuding’s likable if slight Shift, Spin, Warp, Twine, and Jo Meredith’s Please Wait Whilst We Try To Connect You. Meredith’s four-handed work is set to text by Sean Bruno, with whom she frequently collaborates. Drawing a parallel between online identity and the myth of Narcissus, she presents a male and a female dancer tracked and shadowed by their mediated, auto-manipulated selves.

The text, the soundtrack (the Bad Plus, Brad Mehldau) and the choreography are stringently pared back, and the result is subtle and allusive, with a resonance that belies the piece’s small scale. Meredith is probably the best-kept secret in British contemporary dance. Seek her out.

That leaves two works that pretty much hit the spot… Please Wait Whilst We Try to Connect You, by choreographer Jo Meredith and dramaturge Sean Bruno, is also about connection and communication, but adds a layer of complexity by having its characters doubled. The men (Jack Jones and Luke Clarke) are dressed identically in pale colours, the women (Grace Hann and Katherine Kingston) identically in dark, so that instead of a quartet the piece feels like a duet between – and within – divided selves. The music too – cover versions of The Rite of Spring (by jazz trio The Bad Plus) and of Radiohead songs by pianist Bruce Mehldau – suggests doubled identities. The whole set-up forms a richly suggestive matrix for a neatly composed play of feints and flankings between its performers. Suggestive ideas, crafted choreography, poised performances – nice.

The evening’s standout work was Jo Meredith’s Chimera. Meredith is a working dancer whose next engagement is in Will Tuckett’s The Wind in the Willows, which transfers to the West End in December. But she is also, as her 2009 piece Vulnerasti demonstrated, a choreographer of exceptional subtlety and promise. Chimera’s subject is illusion. A conjuror appears and executes a sleight-of-hand sequence. A spoken text by Sean Damian Bruno, meanwhile, muses on the subject of misdirection. What’s essential, we’re told, is to persuade your audience that “the things you show are like the things they have. That your stuff, like theirs, is straight off the shelf.”

Two couples begin to dance to Janácek’s wistful Pohadka (Fairy Story), itself a tale of magic, and we sense that behind the fluent physical exchanges, and the romantic dialogue between piano and cello, all is not well. Sooner or later, the text warns, people will realise that “you are not like them, and the things you have are peculiar”. Meredith plaits dance, music and text together with taut economy of means, crafting a mood of refined sadness. Lovers, like audiences, can be misdirected, she tells us. So “that thing they thought they were beginning to see, that strange posture or shadow”, is revealed as just a trick of the light. Chimera is a clever, unsettling piece whose dark nuances linger. We will be hearing more of Jo Meredith.

Exploring the themes of illusion and delusion, ʻChimeraʼ features four dancers and live spoken word, with accompaniment from a beautiful cello and piano classical composition.The movement is clean and fluid and – while the script describes uncertainty and implausibility – the partnering and storytelling communicates conviction and intent.

ʻChimeraʼ possesses a delightful lyrical quality, unsurprising as Jo is a rising contemporary ballet choreographer (notably having created movement for the National Youth Balletʼs 2010 production of ʻThe Rainbow Bearʼ). This whimsical piece, bathed in warm lighting, leaves the audience wondering whether what was just witnessed really did occur at all.

Vulnerasti, by Lo Commotion Dance Company, takes as its subject the disappearance of a woman. From text written and spoken by Sean Damian Bruno, we deduce that she has attacked her brother and been committed to an asylum. The narrative is ambiguous and references to radio static and falling snow emphasise its incomplete nature. Bruno’s words are intercut with excerpts from Dietrich Buxtehude’s 1680 song-cycle Membra Jesu Nostra – “Vulnerasti cor meum, soror mea, sponsa” (“You have wounded my heart, my sister, my bride”) – to which choreographer Jo Meredith has set dances for herself and three other performers.

This multilayering might appear overambitious, were it not for the piercing clarity
of Meredith’s choreography. By fusing raw detail to a silvery neoclassicism, she creates a movement vocabulary that reflects both the fractured anguish of the contemporary text and the luminescence of the baroque oratorio. Jagged torsions unclench into melancholy curves; catapulting leaps freeze and contract. You could strip the text back to almost nothing, so precisely does Meredith summon its chill timbre.
One of the most pressing issues in UK dance is the lack of big-name female choreographers. Cathy Marston, Kate Prince and others are doing impressive work, but they aren’t in the same league as Matthew Bourne, Wayne McGregor or Christopher Wheeldon. So it’s good to see a talent flaring as brightly as 28-year- old Meredith’s, even on the concrete floor of Studio K. 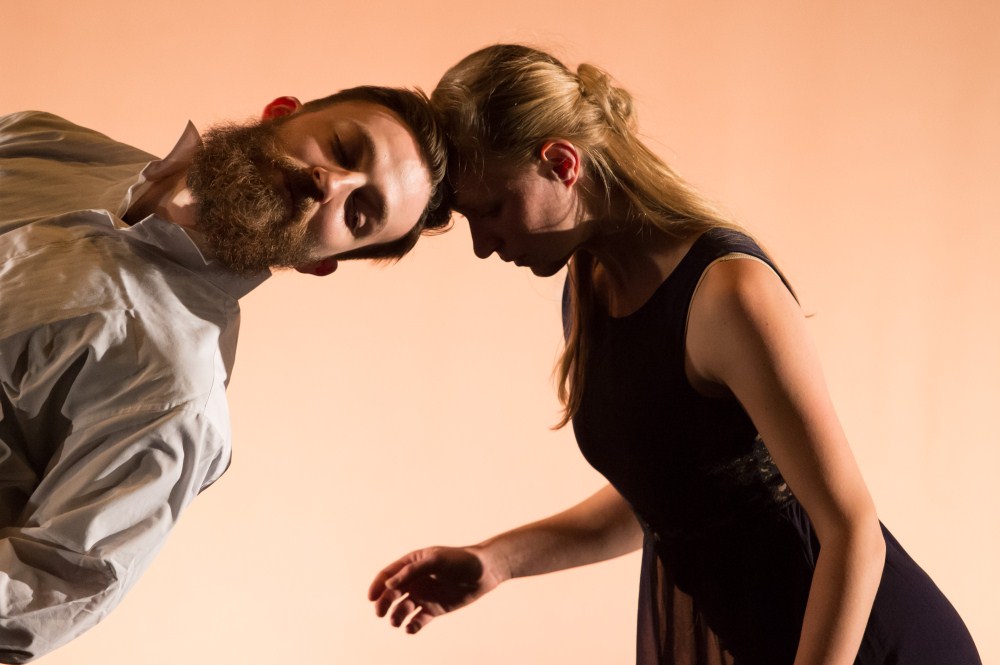 imothy Nelson’s production, brilliantly choreographed by Jo Mere­dith, brings the dichotomy of this story to the fore.

Gail Pearson a wonderful Woodbird, both vocally and in the musicality of her movements.

only the Woodbird, sparklingly sung and fluttered by Gail Pearson, survives of the Wagnerian flora and fauna.

The exquisitely choreographed Rhinemaidens blend modernity and 19th-century fairytale. Brünnhildeʼs emergence for the funeral pyre peroration… is a goose-bump moment, followed by an evocation of engulfing flames that, like so much in this show, marries technical resource and visual artistry.

the appearance of the well-choreographed Rhinemaidens… a trio of delightfully eye-catching, fairytale-like Rhine daughters… 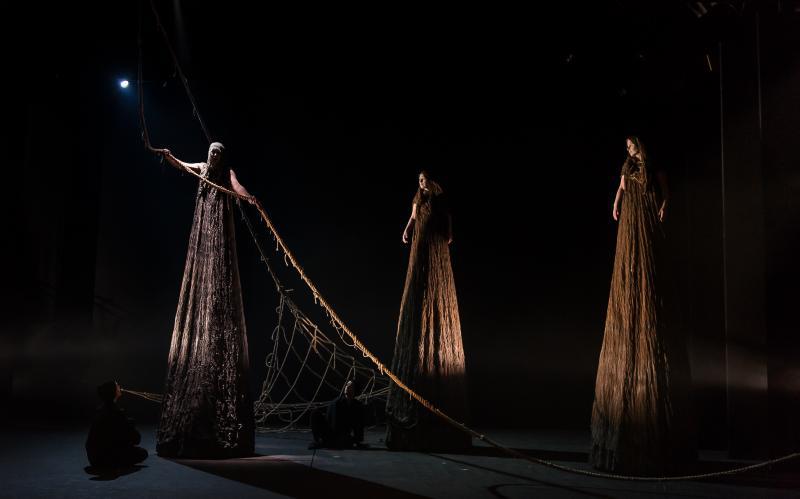 This is the story of a majestic animal, his adventures as a free spirit in the wild and his capture and eventual liberation. Choreographer Jo Meredith, winner of the NYB Choreographic Crystal Plate, created a brilliant ballet, with roles that expressed so cleverly the arctic animals and elements of the tundra against a thrilling backdrop design of snow and ice. A few tears were inevitable from both children and adults, as Joannaʼs narration extracted every emotion from delight, sadness and eventual joy from a beautiful tale of hope for the future of endangered animals. A brilliant and most memorable evening.

Hallelujah. Mary and I were invited last night to a special performance by the National Youth Ballet of Great Britain at the London Palladium. I am not a ballet person, or for that matter, an opera buff, preferring to go to the theatre. But I have to tell you, this made me proud to be British. ʻRainbow Bearʼ, danced by Andrew McNicol, rightly received a standing ovation. Joanna Lumley OBE was the narrator in the second act, for which her husband, the maestro Stephen Barlow had composed the music. The audience left the theatre in a warm, noisy buzz that you get with a hit.ʼ

the highlight of the evening, A Cowardly Affair by Jo Meredith. Set to immortal songs by The Master, Meredithʼs piece artfully fuses period dancing with modern movement, giving place also to hilarious mime. I cannot praise it too highly and ask for it to be seen again.

a very sophisticated performance of social satire – comical choreography at its best. 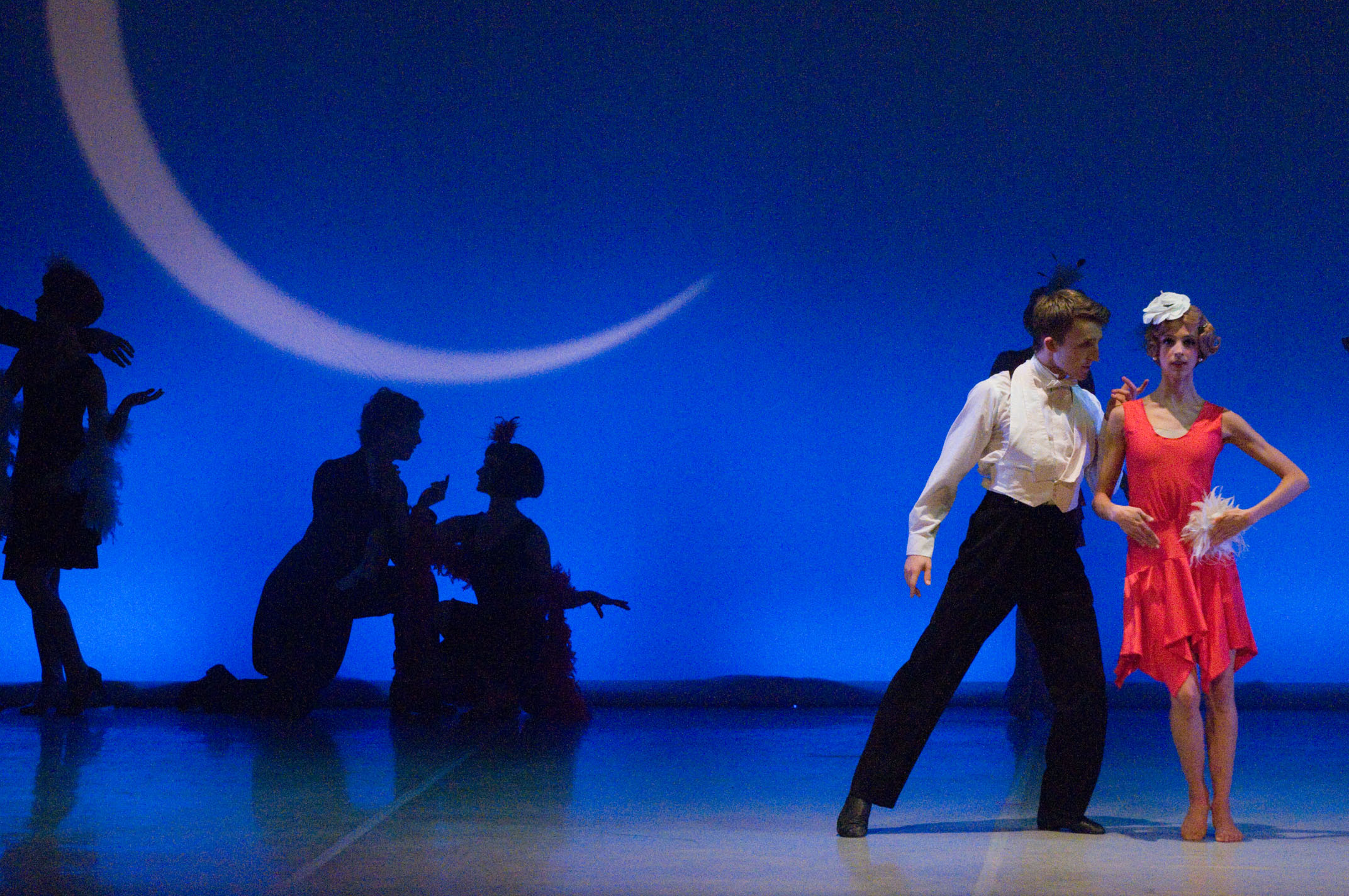